Her son’s death led her to fight for systemic change for all Texas farmworkers
By LUPE, November 28, 2020 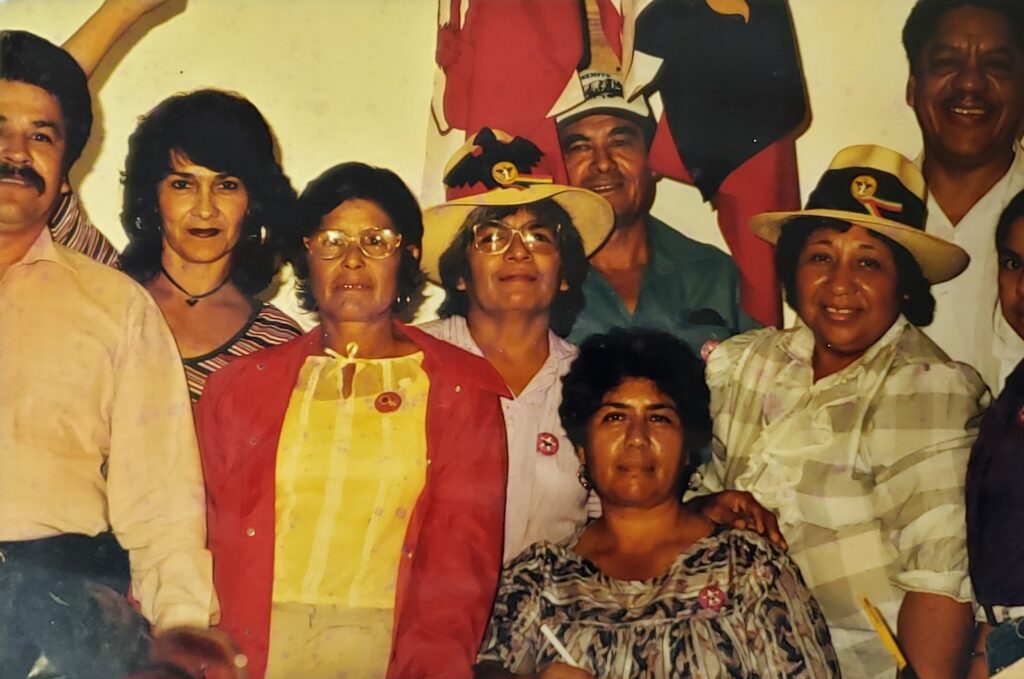 Genoveva Puga, farmworker and UFW leader, died Sunday, leaving behind a legacy winning inclusion for farmworkers in Texas workers’ compensation law. The tragic death of Genoveva’s son prompted her fight against the discriminatory law and catalyzed the UFW’s legal, political, and legislative fight.

Genoveva was a UFW leader in Colonia Rancho Escondido in Alamo, Texas. In the late 1970s, Genoveva would migrate north to work the fields while her son, Juan Torrez, worked locally picking oranges. On March 28, 1977, while Genoveva was away, Juan was crushed to death as he loaded crates of fruit onto a truck owned by Donna Fruit Company.

When she returned to the Rio Grande Valley, she searched for her son’s grave and then began her search for justice.

A rare postcard shows Genoveva kneeling at her son’s grave, hidden beneath tall grass in the Hidalgo County Pauper Cemetery on East Schunior Street in Edinburg. The photograph on the postcard shows Genoveva finding her son’s grave for the first time after returning from working the fields up north. The tragic death of Genoveva's son, Juan Torrez, served as a catalyst in the UFW's fight for the inclusion of farmworkers under workers compensation laws.

Even though agricultural work was the state’s first or second most dangerous occupation, depending on the season (construction was the other), the law excluded farm laborers. The law required an employer to provide medical coverage and time lost for injuries. It also compensated death and permanent injuries. Excluded from the law, injured farmworkers had to depend on local charity and whatever government benefit they could eke out.

With help from the United Farm Workers and civil rights lawyers with the South Texas Project, Genoveva brought a wrongful death lawsuit against Donna Fruit Company. Donna Fruit denied he was their employee by saying he was volunteering to work there.

Genoveva took her lawsuit all the way to the Supreme Court of Texas, which gave her an opening to challenge the exclusion of farmworkers. A group of UFW workers filed a class action alleging their exclusion violated the state constitution’s Equal Rights Amendment, which protected against discrimination on the basis of ethnicity. The legal strategy, hand-in-hand with political organizing, pushed the Texas Legislature to pass legislation in 1984 guaranteeing workers compensation coverage for all farmworkers.

Worker’s Compensation was the first legislation passed to protect farmworkers in Texas during the period that Governor Mark White and Lt Governor Bill Hobby were the elected leaders in the state. There were so many people who worked to pass this bill but Genoveva’s advocacy in the courts and in the legislature was key.

May she rest in peace.