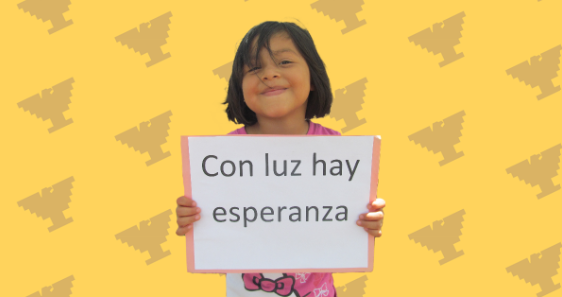 A Brief History of the Hidalgo County Public Light Victory

It took LUPE members 11 years and three legislative bills before the county of Hidalgo finally adopted a public light program.

Thanks to these three bills every resident in Texas has the ability to work with public officials and make sure that their tax dollars are being invested back into their neighborhoods and public lighting.

Watch below or read on to learn how colonia residents built power and won a new government service to bring their neighborhoods out of the dark.

LUPE members know their worth and won’t stop at streetlights. They need funds to pay for their work transforming rural neighborhoods into places where all residents can thrive. Will you help them by making a contribution to LUPE today?

All Hidalgo County families should be able to live in safe and healthy communities. Yet hundreds of Hidalgo County colonias — rural neighborhoods outside of city limits — lack streetlights.

Without streetlights, colonia residents suffer a range of problems. Neighborhood streets are dangerous for children to play after sunset. Adults struggling with diabetes and heart problems have nowhere safe to walk outside. Dark neighborhoods provide cover for vandalism and theft. Low visibility causes otherwise avoidable accidents.

That dark reality is changing, thanks to colonia residents organized with La Unión del Pueblo Entero and ARISE Adelante.

How Colonia Residents Organized and Won a County-Wide Streetlights Program

At a mass meeting with state legislators at Union headquarters, LUPE launched the campaign to win streetlights in colonias.

With the help of former Rep. Gonzales, LUPE members won state legislation in 2005 that authorized counties to expend a portion of their CDBG funds to install and maintain streetlights in colonias. In 2007 they authorized those same counties to collect a fee from colonia residents to pay for the electricity used by those streetlights.

In subsequent years, county commissioners presented a range of excuses for not installing streetlights despite the legislation. Their inaction amounted to lack of political courage.

LUPE members revamped their push for streetlights in 2011 and a breakthrough came in 2012. That year, colonia residents won the installation of streetlights in 13 Hidalgo County colonias. Working with the Communities Creating Healthy Environments (CCHE) initiative of the Robert Wood Johnson Foundation, LUPE members convinced Hidalgo County Commissioners and their precinct staff to install solar-powered streetlights provided by a federal sustainability program. Under the arrangement, county commissioners agreed to fund and install the infrastructure that the solar streetlights would be hung from.

This was the first time county leaders recognized they had the responsibility to bring county neighborhoods into the light.

Out of the Darkness and Into the Light

The next breakthrough came in 2015, when, under pressure from LUPE and ARISE, Hidalgo County Commissioners unanimously adopted a county colonias streetlights program. The vote was a product of the passage of new legislation the same year that removed the final hurdles to systemic installation of streetlights in colonias.

We worked with Texas Low Income Housing Information Service, Hidalgo County officials, and state Legislators to formulate HB 3002, a bill to give counties additional tools and authority to install streetlights in rural neighborhoods. Based on the legislation, LUPE and ARISE designed a colonia streetlight program that county officials adapted into legislation.

Under legislation passed in 2007, the County already had the authority to install streetlights and collect a fee to pay for the electricity the lights use. HB 3002 gave counties the option of adding the charge for electricity used by streetlights to the annual property tax statement issued by the Tax Assessor-Collector. The bill cleared the final obstacle to starting the installation of streetlights in unincorporated subdivisions. HB 3002 was authored by State Representatives Armando Martinez and Sergio Munoz, Jr. and sponsored in the Senate by State Senator Juan “Chuy” Hinojosa.

“We are celebrating because our colonias will finally come out of the shadows with the new streetlights bill,” colonia resident Emma Alaniz, leader and member of LUPE from colonia Curry Estates, said at the time of the bill’s passage. “My colonia is ready for when the law goes into effect. Now that we have the law on our side, we’re going to be sure that the commissioners implement it.”

And ensure it we did. By designing a county streetlights program based on the legislation, county officials had no more excuses. The program we handed to county officials was based on input from dozens, if not hundreds, of colonia residents and incorporated technical expertise of the electric companies that handle electric infrastructure in rural neighborhoods. Through the streetlights program, colonia residents were not only shaping but actually writing county colonia policy.

Early in 2016, the streetlights were installed and switched on in eight Hidalgo County colonias. In 2017, seven more colonias were approved to receive lights. Each year since, streetlights have been installed in colonias under the program.

No New Development Will Go Without Streetlights

Even while colonia residents fought to win streetlights in existing colonias, new colonias were being approved without streetlights.

That slowly changed, as county leaders began to work with developers to informally require streetlights in all new developments approved by the Hidalgo County Commissioners Court. Colonia residents pushed the county to make the arrangement official by updating the rules that govern new neighborhood developments.

And in 2018, colonia residents won that formality. The county commissioners adopted a mandate that developers include streetlights in all new neighborhoods outside city limits. The victory was one of a handful of rules raising standards for rural neighborhood developments.

Now that new colonias will have streetlights installed by developers, LUPE members are pushing the county to devote additional resources toward installing streetlights in existing colonias.

LUPE members know their worth and won’t stop at streetlights. They are working for drainage, parks, and, yes, streetlights for the neighborhoods that still lack them. They need funds to pay for their work transforming rural neighborhoods into places where all residents can thrive. Will you help them by making a contribution to LUPE today?