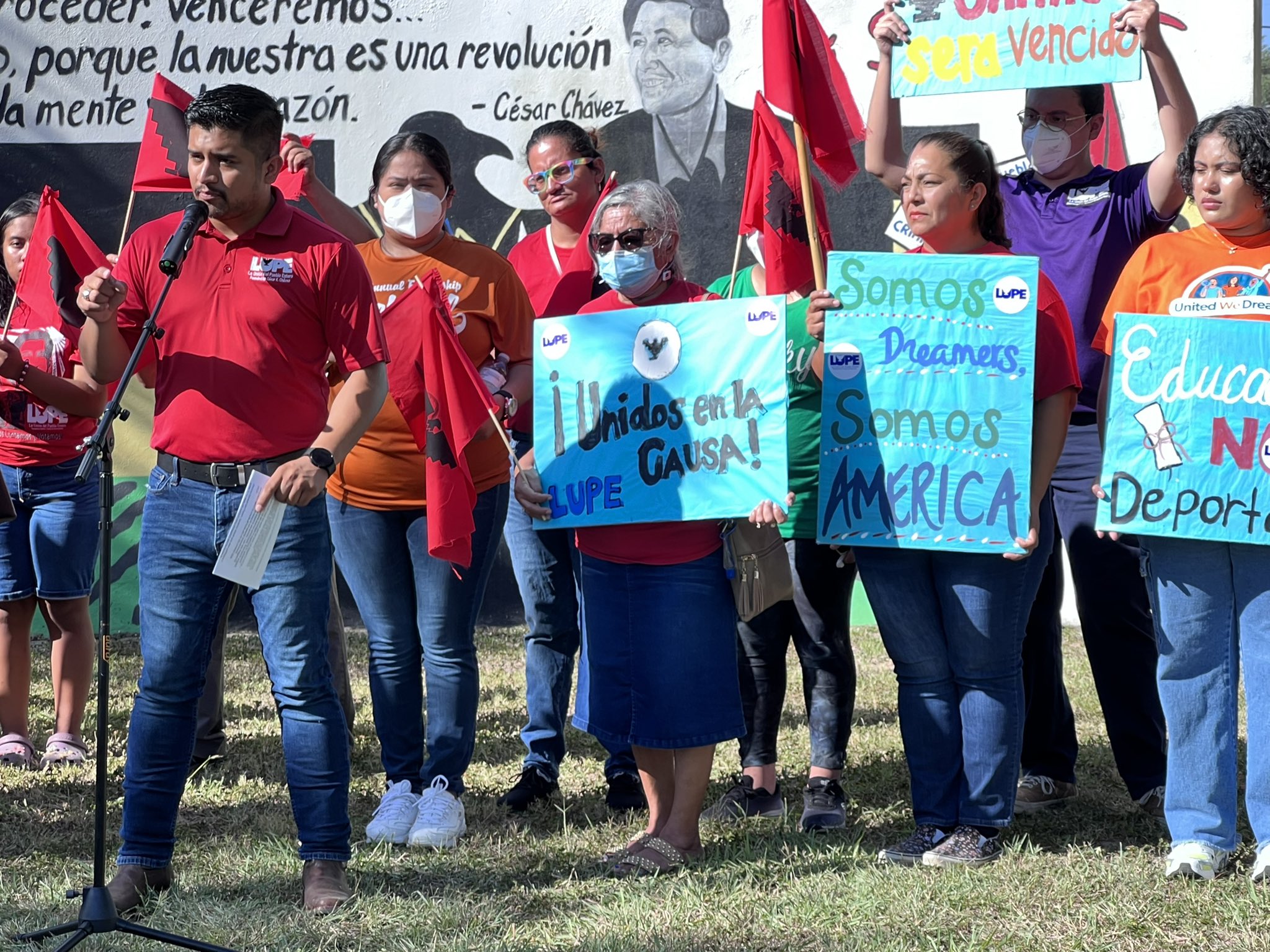 With Texas politicians seeking to strike down DACA in court, Abraham Diaz joined LUPE to call on President Biden and Congress to deliver permanent protections for all undocumented immigrants.

On July 6th the State of Texas argued before the 5th Circuit Court of Appeals in New Orleans that DACA should be struck down. Abraham Diaz is a former DACA holder whose parents remain undocumented. He joined LUPE for a press conference at LUPE headquarters on the morning of the hearing. He called for permanent protections and a path to citizenship for all 11 million people without legal status in the country.

TRANSCRIPT: I'm Abraham Diaz and I was a DACA recipient. And DACA changed my life. For almost a decade, I have lived a freer, more full life thanks to this program. It opened my eyes to the endless opportunities that I deserve. That I deserve as a human being. That I deserve as a person. This program also gave me protection from deportation, which is something that our community needs. It gave me a work permit and more economic stability.

When I obtained my first job as a teenager, thanks to DACA, I worked at a local clothing store just down the road. It gave my family an entire opportunity to be more financially stable. Financially stable means so much to me and to my family. It was an incredible experience, transitioning from working under the table to being able to work where I wanted. To say who I was without living in fear and living with repercussions.

What I do know is that DACA is not enough. DACA has never been enough. We know that DACA is just a bandaid to the big issue that we have in hand. It covered close to 800,000 people when we have over 11 million people that need a solution.

In 2015, my grandmother Mamá Concha passed away in Monterrey, Mexico, and because I had DACA, I was unable to visit her. She passed away, and we had to watch her funeral in a four inch phone. Why? Because DACA doesn't give us the opportunity to be able to travel to our home country to visit our family even though they're dying. This is the reality of DACA, that it's just temporary and it's just a Band Aid.

We are worth more than what our politicians say, more than what Greg Abbott, Ken Paxton say, and use us as pawns for fear and fear mongering in our communities. They're the ones who shame us, who abandoned us in time of need, when what we really need is somebody to stand up, fight for our community, and say, yes, this community of 11 million does need permanent protection. Their attack on DACA right now in New Orleans, is the complete opposite of what we need. If they were true leaders, they would stop that fight. They would stop their attacks on DACA.

We've seen that they jail immigrants with Operation Loan Star just a few hours away. We also know that they block asylum just a few miles away in Matamoros, in Reynosa. And they're also not only trying to stop DACA, but trying to stop Title 42, from President Biden allowing immigrants to be able to seek asylum. This is the reality of what immigrants are facing. They want to keep families down and oppressed instead of using us to make our economies grow, our communities grow, our nation grow.

This legal attack that they're going on right now in New Orleans reinforces what I have felt since before 2012. This is a temporary band aid to the large immigration issue that we have in hand.

DACA is no substitute for what we truly need. We need permanent protection,
not only for me, not only for DACA recipients, but for our parents, for our brothers, for our sisters. And we need long lasting protection that we need and we deserve.

Right now, I call on President Biden, on Congress, on the Senate to take this seriously and to look back on all the great things that this program has created and use that as a stepping stone to create permanent protections for our families and for our community.