With a humble heart, we say ‘see you soon’ to Abraham Diaz Alonso
By Ramiro Gonzalez, November 15, 2022 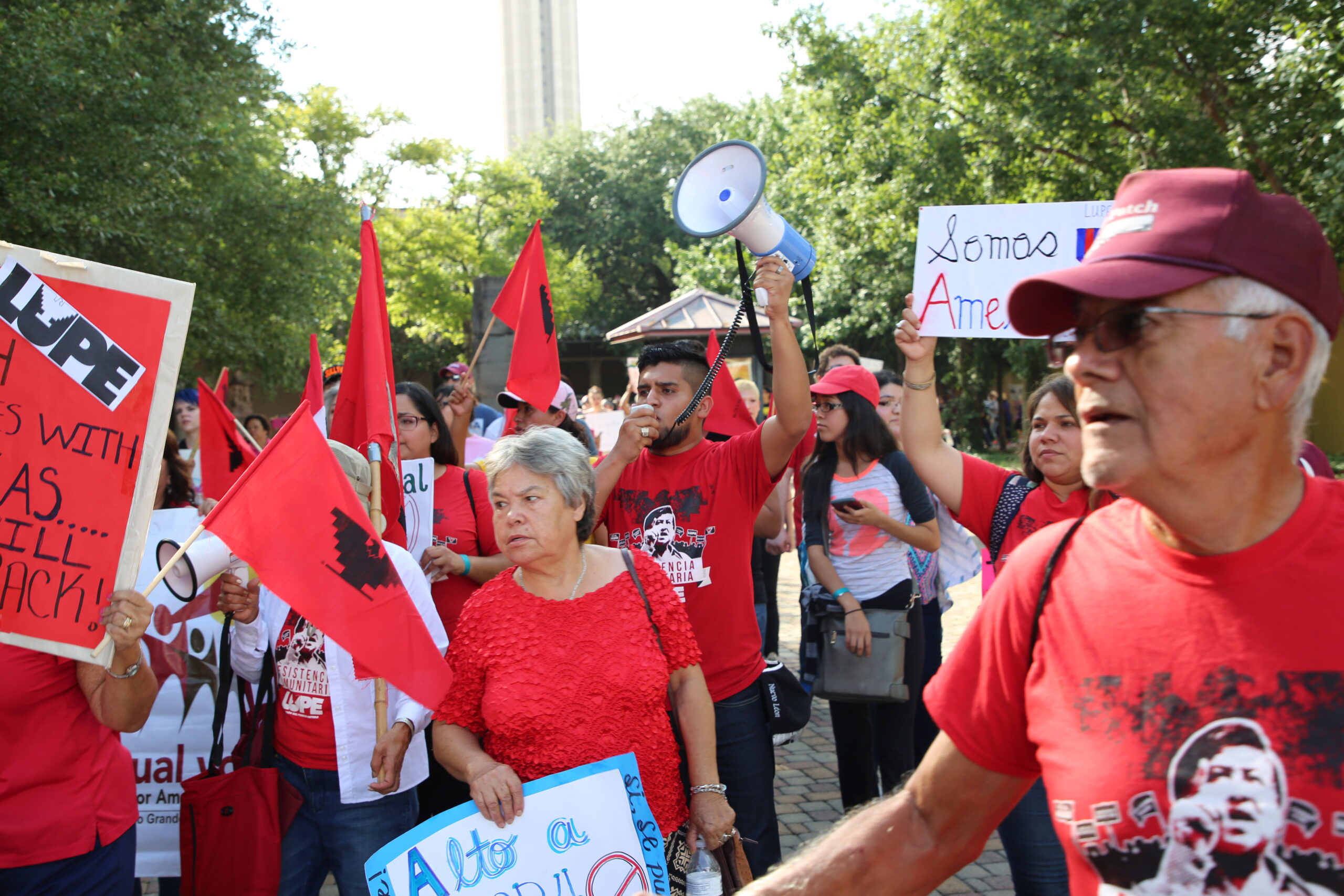 After five years of serving as LUPE staff, Abraham Diaz Alonso said his farewells on Friday, October 21. But it's not exactly a “goodbye.”

As he may be physically leaving La Unión Del Pueblo Entero, he leaves behind an example of service to those who have been in his place or in the place of his parents. He mentions, “those are the people we serve.” Not only are we saying farewell to a staff member who has taken on many roles, but we are seeing off a community member, activist, fighter, and a friend. As he packs his office to embark on his new endeavor, here’s what he had to say.

How did LUPE meet Abraham? Well before Abraham became a member, it started with his parents. His parents have been LUPE members as he estimates since “2008-2009 more or less.” Abraham mentions that “after we immigrated from Monterrey we’ve always lived in San Juan and through one way or another they got connected with LUPE.” While his parents were members of LUPE, on the other hand Abraham was “organizing youth or immigrant youth that were in college, and through actions” to which he was able to cross paths with LUPE. Little did he know that the work he was doing then would elevate and reach out to more than just the university youth as he soon became the education specialist at LUPE after graduation in 2017, acquiring the position shortly a couple months after.

Starting as the education specialist and later social services provider, five years later after graduation Abraham realizes how this has gone “full circle” from his parents being LUPE members to him now being employed by LUPE. With this opportunity he was able to work in the education program helping students.

Before becoming education specialist, he began being involved as the civic engagement coordinator, but what came with this as he explains “I took on the role of civic engagement coordinator, and we had this great campaign where we encouraged people to go out to vote in different places in San Juan, in Mercedes, in San Benito, in Alton, in Mission, in Rio Grande City, through all different counties. And my job was not only to encourage folks, but prepare the database, prepare also the list, the walking hire or help hire, canvassers, and train the campuses and all of this, which pretty much bumped our election results in 2018.” A level of engagement with the South Texas Latino in the colonias, Texans across race, place, and background. This is all necessary “to encourage folks” and to empower them, to make them leaders. It’s certainly more than just a “role” to Abraham.

From what Abraham has done and accomplished within the number of years of service provided to LUPE, what could he say he’s leaving behind?

“I think what I can leave behind is a great example for my colleagues of service. One of the things that I was raised with is serving others as much as I could through my mom. Through my dad. And then pretty much grew with LUPE in the last six years. I know that I've been a servant to the people that have been in my same place or my parents place since that's the people that we serve. We serve low income working class, immigrant, and mixed status colonial residents. It's just a huge variety of people.

“And I leave behind that the work that we do is very grateful, is very fulfilling, and that I can continue to be a servant for the people, but also a lot of knowledge. I take knowledge from all the people that work alongside me. Martha Sanchez, who was my first coordinator. Maricela Martinez, who's my most recent coordinator. All my colleagues who are working here with LUPE have taught me ins and outs on immigration policy. Public speaking like John Michael, among so many other things that I take alongside me not only to grow professionally, but also to grow personally. How to make personal decisions, how to make personal relationships with other people, whether it's inside or outside work, how to relate directly with community members, which is where I'm coming from.”

With that being said and what we take from this is that Abraham has served with LUPE numerous years and with that time spent he says, “I think what makes me the proudest of working here was the service that I gave to others. All of this was done with a humble heart. For this is the people that we serve.” People such as “my parents…treating every single person that I met here at LUPE the way that I want my parents to be treated because they were or are in the same position that the people who walk into our doors are.”

As Abraham packs up his bags and says “see you soon” as this is not a “goodbye”, he carries the words of LUPE and it’s teachings along with him onto a “grander scale” which was not an “easy decision”, but it's been made.

Abraham shares one final message: “The work that LUPE does has so much potential, so much potential to reach others in the Rio Grande Valley. We have thousands of families that are in limbo and I think we are on the right path and have so much to do to reach the full loop of potential that it can reach working here. I’ve seen all the strengths of our organization, all the great work that’s done. I think putting the right people in the right place would definitely increase our outreach, our audience, our members as well. We are expanding…we can be getting tens of thousands or maybe hundreds of thousands of people to know about the work that we do to be a part of the work that we do. To be a part of the movement that we’re in and also support the work and the movement that we have.”