Looking Back On 10 Years Of DACA In The Rio Grande Valley
By John-Michael Torres, June 14, 2022 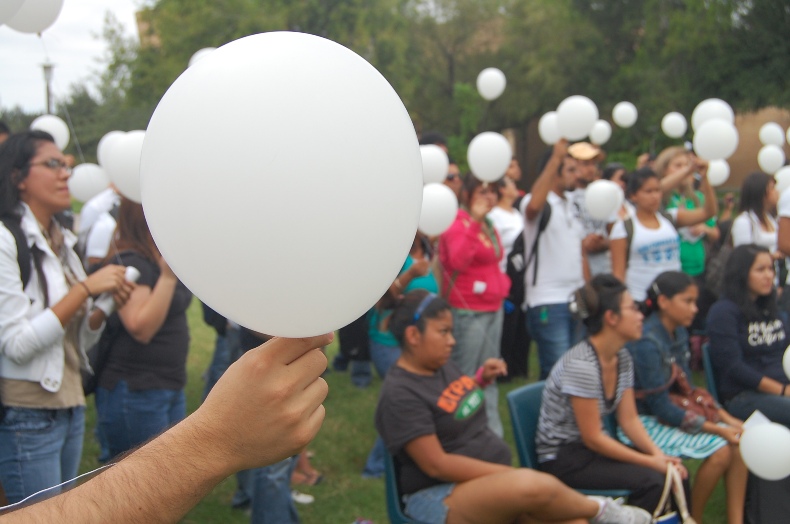 A decade of the fight for immigrant dignity in the RGV

Wednesday, June 15th, 2022, marks the 10 year anniversary of DACA and over a decade of relentless organizing for a path to citizenship and a stop to deportations. Join us and look back on 10 years of DACA and the fight for immigrant dignity in the Rio Grande Valley.

10 Years of DACA in the Rio Grande Valley

December 2010 | The DREAM Act passes the U.S. House of Representatives. The same month, the U.S. Senate fails to pass the bill, shocking and devastating immigrant youth and their allies.

The failure of Congress to pass the DREAM Act sets the stage for the next phase of immigrant youth activism demanding an end to deportations.

November 2011 | Joaquin Luna, undocumented senior at Juarez Lincoln High School in Mission, takes his own life, spurring more immigrant youth at UTPA to come “out of the shadows” and organize. The UTPA Minority Affairs Council becomes their organizing home.

June 2012 | Mass meeting at LUPE to celebrate the DACA victory and explain the program. Hundreds of hopeful immigrant youth and parents show up to learn if they qualify.

August 2012 | LUPE submits first round of DACA applications on behalf of our members. Iara Kirchner (Aldape) of Mercedes is the first LUPE youth to receive a work permit under the program.

After Immigration Reform fails in Congress, immigrants and allies across the nation join the call for President Obama to take executive action to stop deportations.

June 2016 | The Supreme Court maintains a lower court decision that barred DAPA and expanded DACA from going into effect.

July 2016 | Cynthia, a DACA recipient from McAllen, is able to leave the country to visit her dying mother and say her final goodbyes. DACA recipients can travel internationally by applying for Advanced Parole.

September 2017 | Trump announces he will end DACA. Immigrant youth and allies gather at the Texas Attorney General’s Office in Pharr to protest his announcement.

January 2018 | Democrats fail to pass the Dream Act as part of a must-pass spending bill. McAllen DACA recipient Allyson Duarte pens a column expressing disappointment that her representative, Vicente Gonzalez, “let Republicans get away with this and let them take me and hundreds of thousands of other Dreamers hostage.”

May 2018 | Texas sues to end DACA, claiming it is illegal and unconstitutional

With Democrats at the helm of the White House, Senate and House, the immigrant rights movement pivots to pressuring President Biden and Democrats to pass a pathway to citizenship while they hold power

March 2021 | U.S. House passes Dream Act, Farm Workforce Modernization Act, and other bills providing a path to citizenship for undocumented immigrants. When Republicans refuse to support the bills, Democrats begin plans to use “reconciliation” to get the bills through the Senate without republican votes.

July 2021 | In the lawsuit brought by Texas, a federal judge rules DACA is illegal, putting a partial end to it. The ruling shuts the door on new DACA applications, but allows renewals to continue.

September 2021 | LUPE member Karina Hernandez travels to Washington D.C. to push Democrats to pass Build Back Better with a pathway to citizenship. In elementary school, Karina was bullied because of her dark skin, accent, and not knowing English. She decided she wouldn’t let herself be discriminated against and would fight to be included. She joined the fight for a pathway to Citizenship for dreamers like her and the rest of the 11 million undocumented immigrants.

December 2021 | West Virginia Senator Joe Manchin withdraws support for the Build Back Better bill. The bill needs the support of all 50 Democratic Senators to pass and is therefore dead. The news ends hope for passage of immigration legalization in Congress this year.

For a decade, DACA has been a government band-aid for delivering lasting protection for immigrant people. Not only is DACA at risk under Republican attacks, millions more immigrants continue to face the threat of detention and deportation without any form of protection.

The fight for immigrant justice is part of a broader movement for human rights. All people have fundamental rights to live freely and safely, to have autonomy over our bodies, and determination over our futures. We won’t stop until our immigration processes reflect those values. Just like we won better wages, safer workplaces, and civil rights in our past.

After a decade of DACA, it’s beyond time for permanent protection for all.